What do aleph-taw, alpha-omega, and A-Z have in common?  They are all the first and last letters of the alphabet in three languages–Hebrew, Greek, and English respectively. Here are 20 other intriguing and factual stories from the world of biblical language, writing, and literature.

A is for Ox: Very early alphabets used pictures of everyday objects to represent the sounds of the first letters of these words.  The first letter of the Hebrew alphabet is aleph, derived from alpu “ox,” and so the Hebrew “A” was a line drawing of an ox head.

Blessings from A to Z: In Jewish tradition, God blesses Israel from “aleph to taw.” These Hebrew letters are the first and last in the Hebrew alphabet, so the expression means that God blesses Israel completely.  By striking coincidence, the list of blessings found in Leviticus 26:3-13 begins with aleph and ends with taw.

Codes, Commands, and Covenants: The Mosaic Law contains 613 specific commandments that regulate most aspects of people’s lives and worship–from circumcision to food laws.  The concept of covenant was familiar to people living in the time of Moses.  Archaeologists  have discovered records of Hittite covenants dating from 1400 to 1200 B.C.

From a map of the gold mines in the Sinai, 20th dynasty.

Early Paper: Our word “paper” comes from papyrus–an early, inexpensive material used as a writing surface.  Papyrus was made by stripping long papyrus reeds of their bark, laying them next to each other in rows. Another layer was laid crosswise across the top.  The two layers were soaked with glue and water, then pounded into one sheet.  It was finally smoothed with pumice.

God’s Writing: The Bible tells us that the Ten Commandments were “written with the finger of God” (Ex 31:18). In fact, this is emphasized later when the writer says: “The tablets were the work of God, and the writing was the writing of God, engraved upon the tablets.” (Ex. 32:16)

How to write on Clay: In ancient times, even before Abraham, clay was a popular writing surface. Wet clay was touched with the tip of a sharp-pointed reed to make impressions. Soft clay tablets were used for writing, and afterward baked hard. Broken fragments of pottery (shards) might also be used. Assyrian and Babylonian scribes used a wedge-shaped stylus to make cuneiform characters on their clay documents. Thousands of these artifacts have survived, providing scholars with valuable information about people in Bible lands. 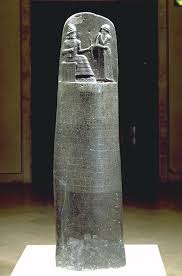 It’s Carved in Stone!: The most important documents in ancient times were laboriously carved into stone so they would remain permanently on record. The Ten Commandments were written on two stone tablets. Hammurabi’s Law Code was engraved on a stele (a type of stone marker) eight feet high. At the top, Babylon’s King Hammurabi is shown receiving the symbols of authority from the god Marduk.

Joseph’s Robe: There  have been many stories, plays, and even a Broadway musical about Joseph and his famous coat. It is usually depicted in gorgeous colors and fancy design. Indeed, Joseph’s gift from his father Jacob has taken on a legendary life of its own. Yet the best Bible translations simply describe the garment this way: “….and he (Jacob) had made him a long robe with sleeves.” (Gen. 37:3)

King Mesha’s Inscription: Moabite king Mesha carved a message on a large black basalt stone. It had 34 lines of text and dates to 830 B.C. It tells of his conflicts with the Israelite kings Omri and Ahab. Mesha says to Omri– “As for Omri, king of Israel, he humbled Moab many years, for Chemosh (the Moabite god) was angry with his land.” 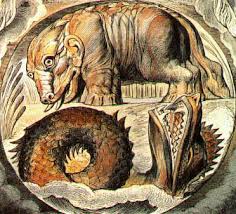 Leviathan and Behemoth: Although people are fascinated by these mysterious creatures of the Bible, they disagree on the true meaning of leviathan and behemoth (Job 40:15-24; 41). Some think they refer to imaginary monstrous creatures, or ancient animals that are now extinct. Others think that behemoth was either an elephant or a hippopotamus, and that leviathan was a whale or a crocodile. Although scholars cannot agree on the identity of these creatures, they are wonderfully described in the Scriptures!

mrhdlttllmb: This is the nursery rhyme “Mary had a little lamb,” written without any vowels, word divisions, or punctuation. The Old Testament was originally written without any of these, and readers had to supply these themselves to make sense of the text.

Old Hebrew Inscription: The earliest object with a Hebrew text written  on it is a limestone tablet containing a farmer’s calendar. It was used in Gezer, a biblical city, almost 3,000 years ago. It reads in part:  “His two months are (olive) harvest, His two months are planting (grain).”

Psalm 119–Poetic and Precise: Psalm 119 is the longest psalm–176 verses in all, consisting of 22 eight-verse sections. Each section begins with a successive letter of the Hebrew alphabet, and each verse within that section begins with the same letter. In this stylized, formal psalm, the writer expresses delight in God’s law.

Q and the Synoptics: Matthew, Mark, and Luke are sometimes called the synoptic Gospels. The word “synoptic” means “able to be seen together.” It is possible to look at these three books side by side and compare their contents. Much of the material is shared and seems to come from a common source.

Q is the first letter of the German word for source (Quelle). It is the name given to the unknown document from which scholars think Matthew and Luke took their sayings of Jesus (which do not appear in the Book of Mark). Q may have been written in Aramaic in about 50 A.D.

Revival of a Language: Hebrew began to die out as a spoken language toward the end of the Old Testament period. Nehemiah was distressed to find Jews who had married foreign women and whose children could not even speak “the language of Judah” (Hebrew).

After that, Hebrew was kept alive only among the rabbis in the synagogues for more than 2,000 years. Then–about 100 years ago–Eliezer Ben-Yehuda, a Lithuanian Jew, proposed and worked tirelessly for its revival as a spoken language. Modern Hebrew is based upon biblical Hebrew and Talmudic Aramaic, and it has traces of Yiddish, German, and Russian. 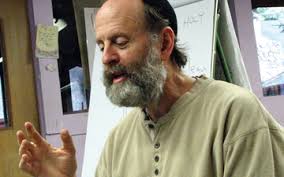 Strange Meditations: The Hebrew word for “meditation” (hagah) is also used to describe the coo of a dove, the growl of a lion, the plotting of evil rulers, and the reading of the Bible. These things are all something done audibly. Thus, when Jews were instructed to meditate on God’s word (Psalm 1:2), this meant that they should recite it aloud to themselves.

Tablets of Clay: More than 4,000 clay tablets were discovered in the 1920’s at ancient Nuzi, east of the Tigris River. These date to the middle of the second millennium B.C. The texts give a wide-ranging picture of everyday life at that time, including things such as land ownership, the position of slaves and women, prices and sales of goods, legal customs, and family law. Many intriguing parallels are found between Genesis and the Nuzi documents.